Westfield, NY is a tiny town on the shores of Lake Erie. Oddly enough you may find yourself there someday as it’s about 10 minutes from Chautauqua Institution, a popular summer resort founded in 1874. It’s due to that proximity that you find things like gourmet restaurants and cheese shops in seemingly the middle of nowhere. So here is a rundown of the places I visited when I was there the week of July 4th, 2017.

Chef/owner Brian Kiendl opened The White Carrot just last year and it’s already getting rave reviews. The restaurant is a garden to table concept, heavily sourced from their own garden and green house on the five acre property. They offer a prix-fixe menu as well as a chef’s tasting menu. We opted for the latter with the wine pairing. While there were some standout dishes, I will warn you that the meal took almost three hours so plan accordingly. 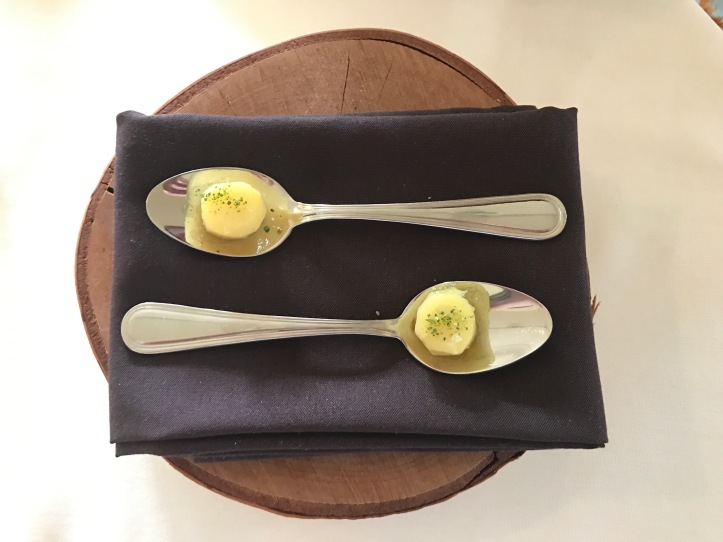 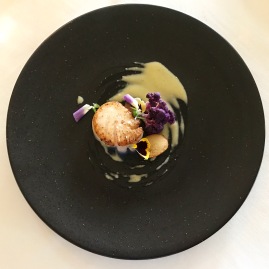 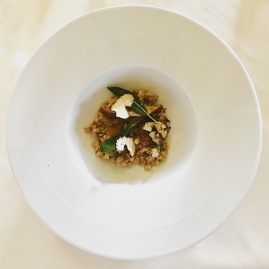 Bottom – Garden Plate “A celebration of great vegetables” (carrot charred, pureed, shaved; peas, edible soil, mounted milk gel, fresh fennel). This was absolutely beautiful and tasted good as well. I could eat the edible soil on just about everything. Is it bacon? I don’t know but it was great.

Top right – Lightly smoked scallops (pickled mayonnaise, new potato, roman cauliflower). The scallops has a salty crust that I loved. The pickled mayo was great alone but sort of overpowered the scallop.

Below top right – Mushroom farro (4 year old gouda, foraged oyster mushrooms,summer truffles). Holy shit was this good. It was garnished with sage confited in duck fat. The whole thing had this complex umami flavor that was just to die for. 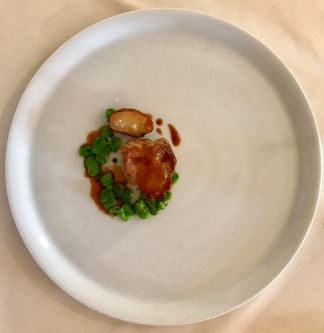 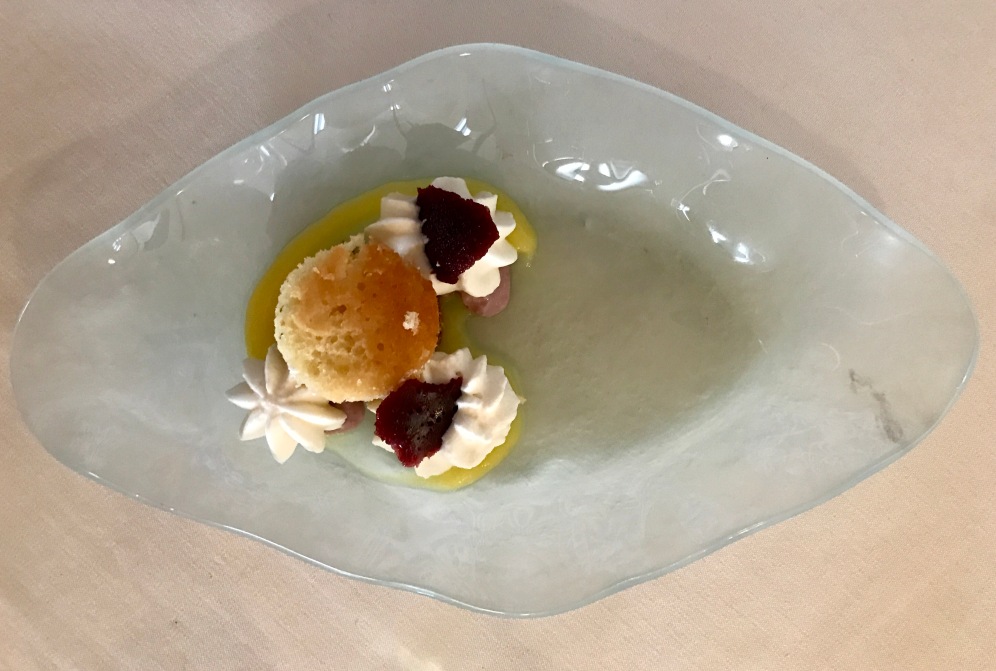 Top left – BBQ lamb belly (“sour cream and onion” potatoes, red onion agrodolce). They onions were absolutely amazing and vinegary. Even though I don’t love mashed potatoes these were great because I love sour cream and onion. The lamb was fatty as to be expected from this cut but good nonetheless.

Top right – Poached halibut (radicchio, pea broth, seasoned lardo). I didn’t love this. It was salty and a tiny bit fishy while the pea broth was sort of bland. However, there was a basil leaf sauteed in olive oil in it that was fabulous.

Below top right – Roasted loin of “Creekstone Ranch” veal (fresh favetta, veal jus). The jus was great but I found the veal itself a little boring. However the fava were very good.

Bottom – Lemon sponge cake (last year’s blueberries). Could have eaten about five of these! It was so good. The sponge cake was delicious and sat atop lemon curd, which is basically my fav.

This restaurant is located inside the absolutely gorgeous Athenaeum Hotel on the grounds of Chautauqua Institution. It’s a pretty breathtaking space to begin with but once you add a view that overlooks Chautauqua Lake, it’s over. Note that you need a gate pass to enter the Institution but according to the Heirloom Restaurant website outside diners are given a complimentary one. 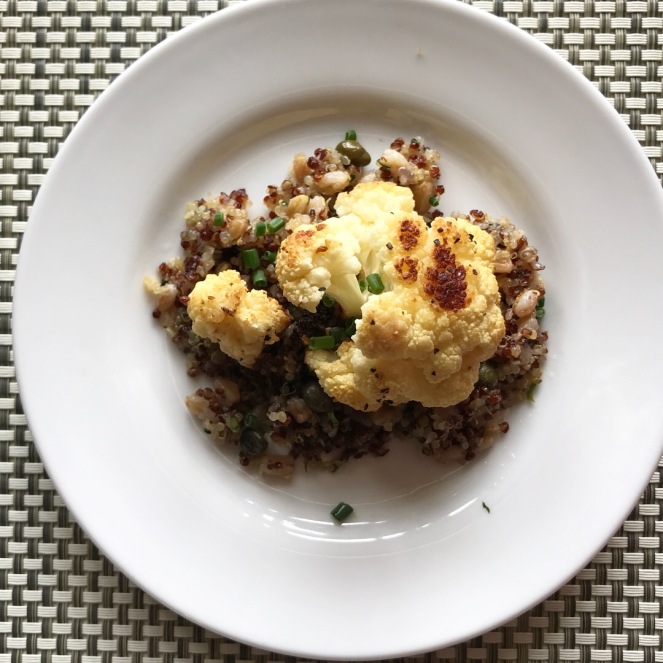 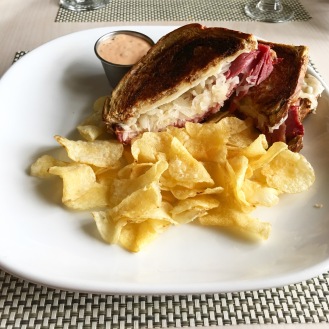 Top left – roasted cauliflower (warm grains, shallots, parsley, chives, brown butter, lemon juice, capers). Oh my god was this good. The lemon, shallots and capers added a punchiness to the savory, subtle flavors of the grains and brown butter that was divine.

Top right – Reuben (housemade sauerkraut, Thousand Island dressing, chips). This was really good. They actually had stone ground mustard on the sandwich and the dressing on the side, which made it super flavorful and less soggy. The corned beef was nice and lean as well.

Bottom left – Southern Tier Burger (IPA braised onions, sauteed kale, Reverie Creamery cheese, Parmesan fries). This may have been the best burger I’ve ever had. The IPA braised onions gave it an almost demi-glace flavor while the cheese was the consistency of goat cheese with a more mild flavor. The perfectly toasted brioche bun and the juiciness of the meat all combined to make this absolutely fantastic. It wasn’t even my meal and I asked for like five bites.

Bottom right – Chef Edward Work. He was so nice to come out right in the middle of the lunch rush and chat. Thanks Chef!!

This is a simple, small town restaurant done very well. It’s very low key but the owners Ed and David are so incredibly friendly and the food was really, really good. Ed even opened  a bottle of wine to share with us at the end of our meal. 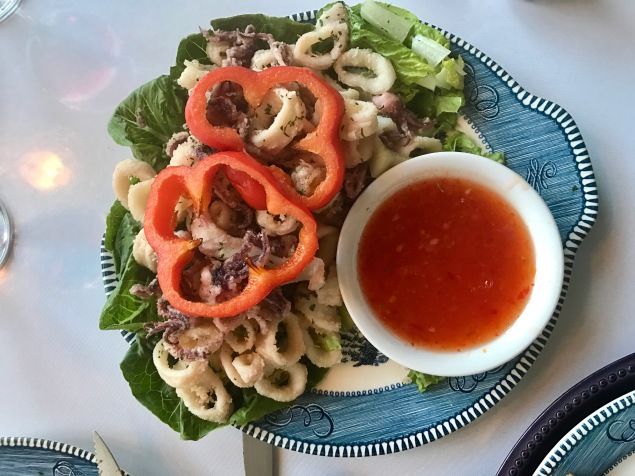 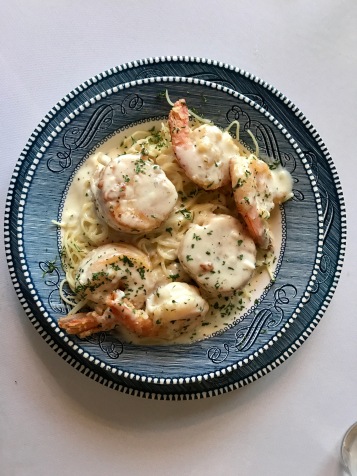 Top left – fried calamari with chili sauce. This was just the lightest tempura batter ever and tasted fantastic.

Top right – Shrimp and Scallop provencal. This was like a light alfredo and tasted so good. The scallops were ginormous and tender, while the shrimp were fantastic.

Bottom – Braised osso bucco (peppercorn demi-glace, orzo). This was so tender and juicy.

This little diner on Barcelona Harbor will always hold a special place in my heart. It was my first job–as a dishwasher no less!! Plus obviously we love the name given our son Jack.

Owner Finn and brewer Matt opened Southern Tier in 2002, at which time they produced 20 barrels of beer a month. Their growth has been pretty amazing and they are now up to 150,000 barrels a month, projected to grow in the coming years to 300,000. Their beer is now available in 36 states and 14 countries. I learned this on a great tour by James, after which we ate, drank, and listened to music at their Empty Pint brew pub.

Top left – Imperial Cherry Gose. This sour beer was absolutely amazing and I can’t wait to find it in DC.

Top middle – Thai chicken lettuce wraps, pretzels, pulled pork nachos. I’m not usually a soft pretzel fan but when they’re fried like these were–watch out. Also those nachos were slammmmmmin’.

Below top middle – tasting flight in the Schalander Tasting Room after my tour.

Top right – The Empty Pint inside. Not pictured: all the outdoor seating, live music, and lawn games.

Bottom left – Brewery tour, which was packed and they do multiple per day.

Bottom right – James pouring me a beer during the tour. It was a take on their 2x Tangier that’s only available as part of the tour–score!

Five and 20 Spirits and Brewing

I love this place! Five and 20 also has a wine-making arm, Mazza Chautauqua Cellars, making it the first brewery, distillery, and winery in New York state. It began life as a family-run winery in 1972 under Mario’s father and uncle. In 2006 they started distilling and the brewery portion is just two years old. Owner Mario Mazza and distiller Joe Nelson were so generous with their time and gave me the best private tour. 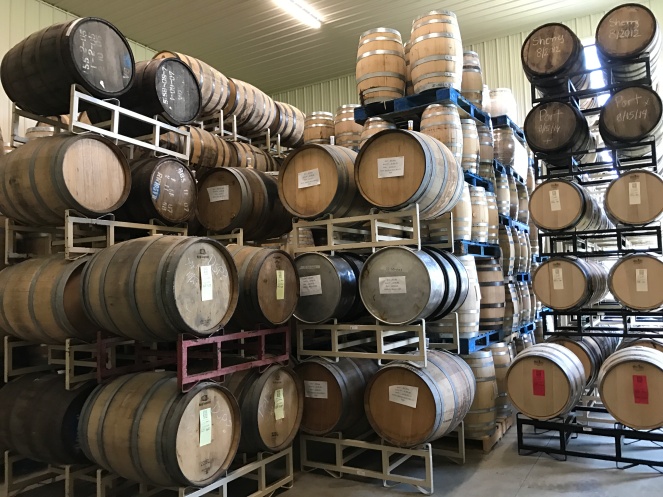 Top left – lots of aging happening including spirits and beer.

Below top right – Bourbon for sale in the tasting room. And no, it does not need to come from Kentucky or Tennessee to be bourbon!

Bottom – Bird, a great little restaurant on the grounds. I wasn’t able to eat there but their menu looked amazing (e.g. kimchi quesadilla and the pressed Cubano sandwich). 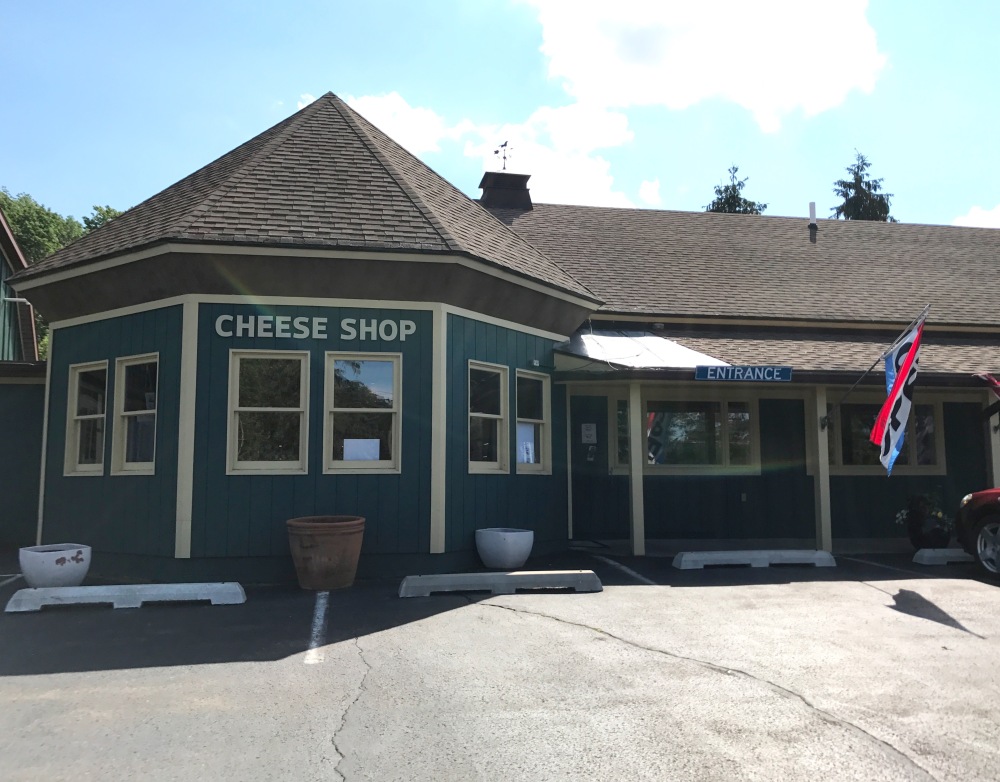 This my friends is some good cheese. It’s just two years old but owners Riko Chandra and Jim Howard have really created something special. We went twice and seriously considered a third visit. They make amazing cheese themselves and sell other outstanding cheese from around the world.

Top right – Local honey. They partner with artisans from around the area to make products like a handmade cheese tasting journal and a grape juice carboy cut to become a cheese dome and olive plate.

Bottom – A case of their wonderful cheese. We bought the Tom (award-winning!), Wanderer, Palomino, and Luna cheeses by Reverie, as well as an amazing goat and cherry cheese, double creme brie, and a variety of accouterments.

Oh man do I love this place. It’s only six years old but it’s hugely popular and was even featured on the show “A Few Good Pie Places” on PBS. It’s best to order ahead as they do sell out and don’t always have every flavor on hand. 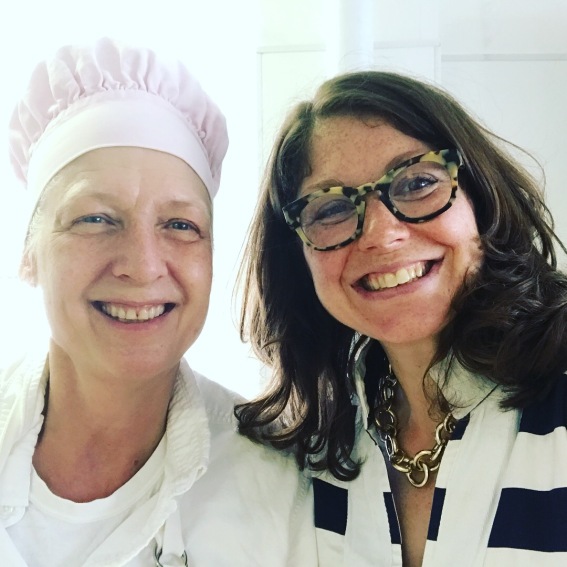 Left – the best cherry pie. It’s not too tart, tastes slightly of almond, and is absolutely delicious.

Right – Owner/pie-maker Connie Thayer. She is so friendly and if you look super closely she’s photobombing the store front pic! 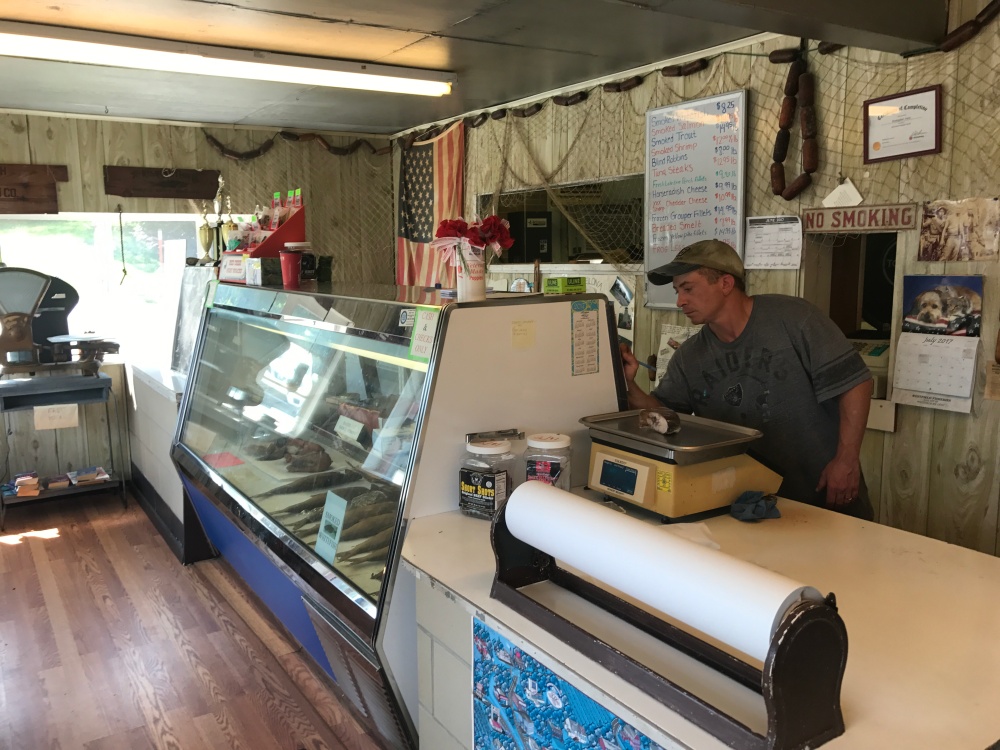 This place is awesome. It’s family-owned and been around forever. They smoke and supply fish from Lake Erie and other locations to restaurants in the area. It smells VERY fishy inside but it’s worth it. 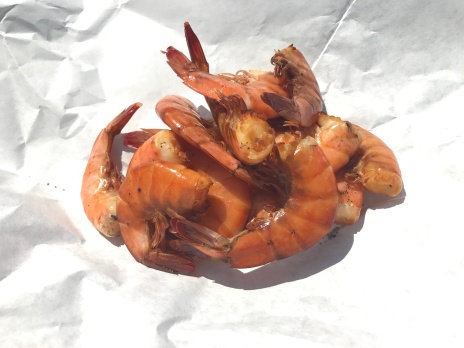 Top left – smoked peel and shrimp that we ate during our picnic lunch on the beach.

Bottom right – smoked white fish. We bought a quarter pound and ate in on crackers. 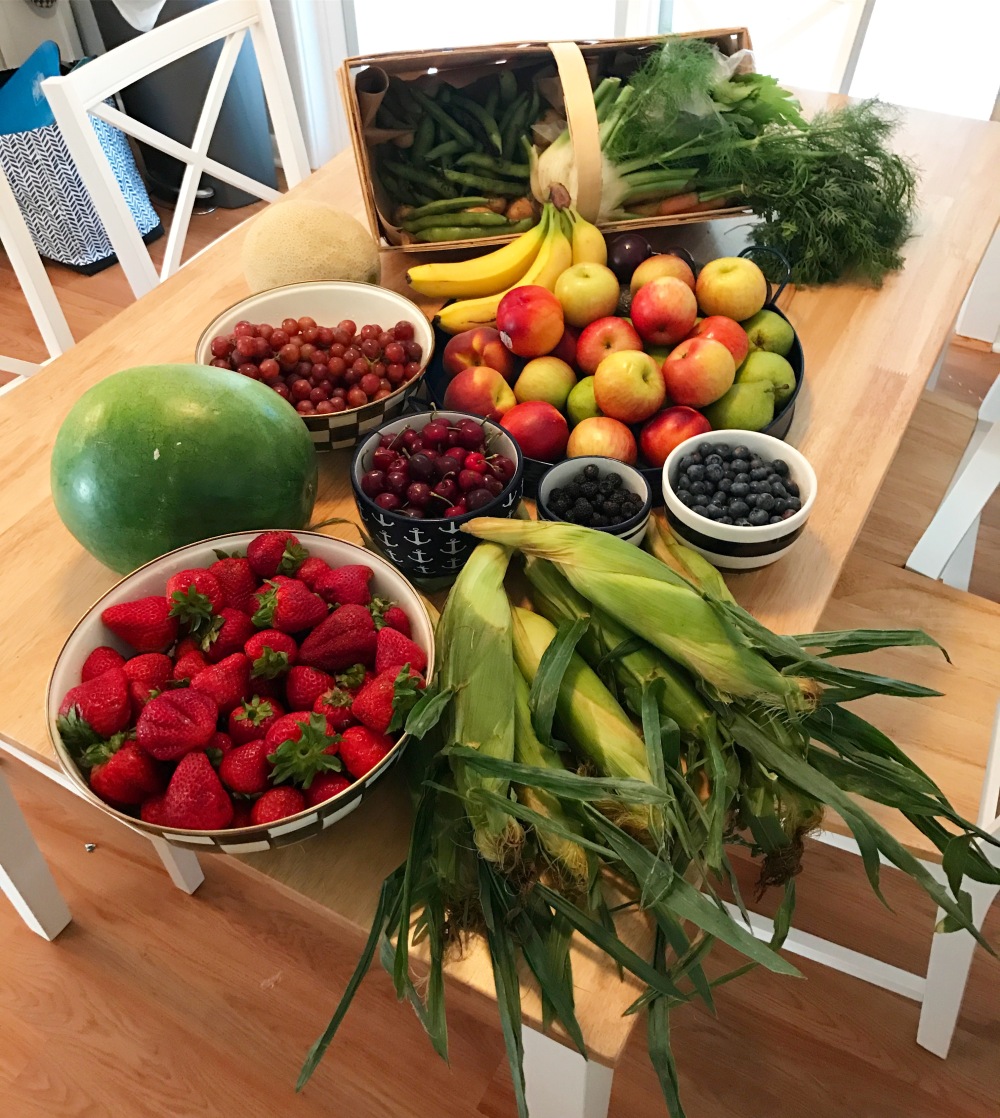 I’d be remiss if I didn’t mention the amazing produce we got while in Westfield. Not gonna lie, a few items are from the grocery store but the majority was from farm stands, farmer’s markets, and a local CSA.

Top right – Raspberries at the Westfield Farmer’s Market, which is every Saturday in the summer.

Bottom – Our basket from CHQ Local Food, which is basically a CSA you can do for just one week or the summer. We got fennel, black raspberries, carrots, potatoes, and lots of fava beans, among other things.

There are so many other great places in this area that I didn’t get a chance to go to. Jamestown, Erie, and other surrounding towns have a lot to offer. It’s an area that really embraces its rich agricultural heritage–Westfield is the birthplace of Welch’s grape juice after all. If you do find yourself there take the time to explore and eat all the things!

5 thoughts on “Best of Westfield and Chautauqua”