I had the world’s most Methodolochick dinner at Toki Underground with girlfriends/colleagues Ruth, Emily, and Ariel on 6-15-2017. This is a hip, fun place with good food and even better drinks.

The restaurant is upstairs and like Bad Saint consists mainly of counter seating and stools. The difference is these stools move and aren’t quite so close together so it’s a bit more comfortable. This place is small and fills up quickly so if you want to go either make a reservation (which they only accept from 5-6pm) or be prepared for a short wait.

The bar, which is made of pinball machine innards,  dominates the main dining area. The rest of the decor is similarly fun and funky, with stickers and little Japanese figurines all over the wall, not to mention a tree wrapped in rope spreading up from the stairs.

The kitchen is open and there is a chef’s counter of sorts lining it  as well. 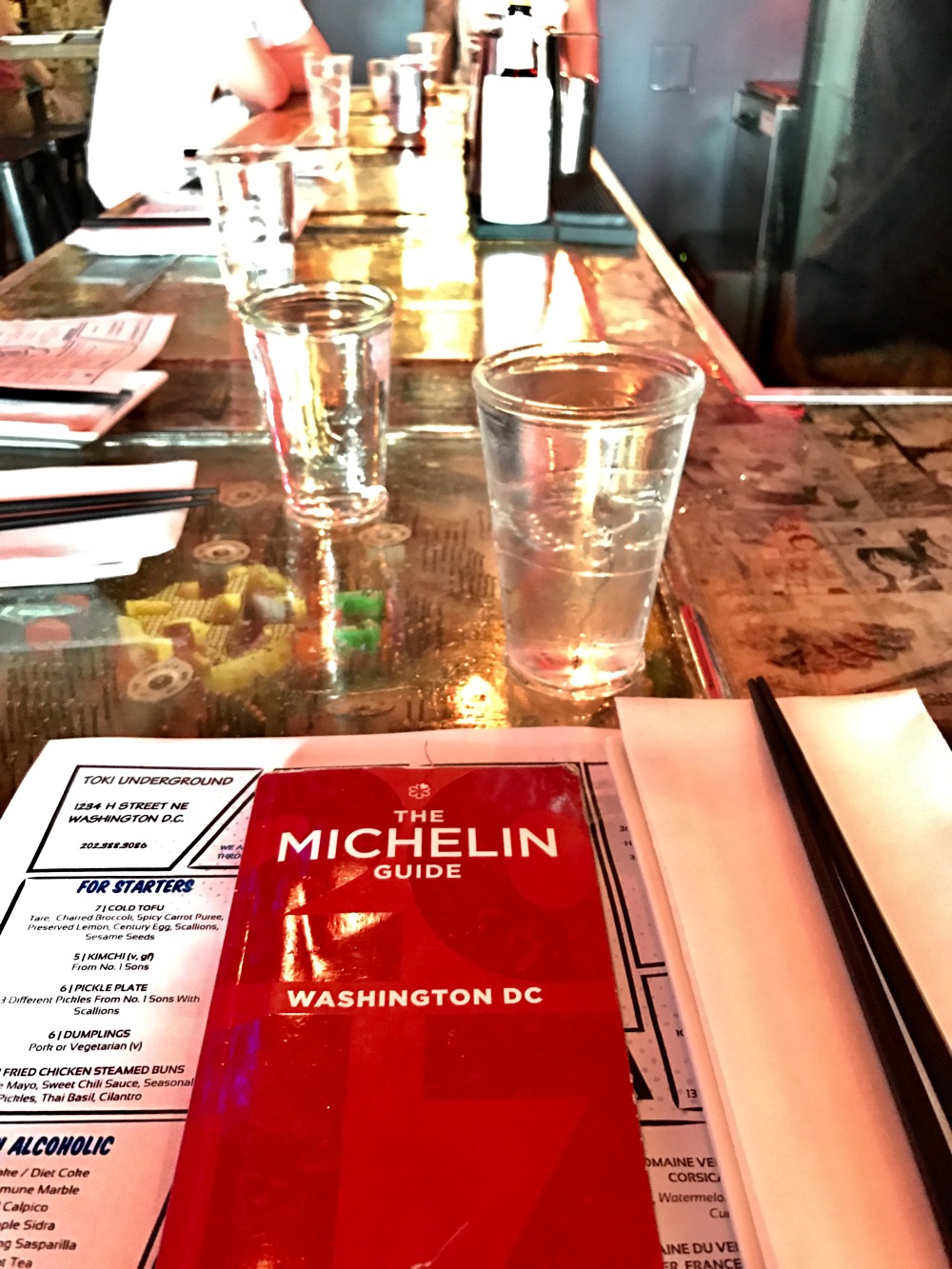 We were seated at the bar and you can kind of see the pinball parts in the picture below. The Bar Manager Dan McCarthy waited on us, which was great because I had about a million questions and was as interested in the cocktails as the food.

Here’s an action shot of Dan which is totalllllly not posed.

Clockwise from the left:

Toki Monster (Bulleit bourbon, Ardbeg scotch, Barenjager, Angostura bitters, Pork Belly Kushiyahi). Despite being bourbon based this was mellow enough that even I could almost drink it. But what was really delicious was the pork belly, which was the perfect combo of smoke, fat, and crispiness and blended really well with the cocktail.

Alt-F Cinco (Milagro tequila, grapefruit and lemon jucie, simple, Angostura). This was light, lemony, and well-balanced. You could ever so slightly taste the tequila but just barely.

Friend chicken steamed buns (Japanese mayo, sweet chili sauce, seasonal pickles, Thai basil, cilantro). This came highly recommend and it’s easy to see why. The sweet chili sauce’s flavor was a combo of sweetness, vinegar, and smoke, while the chicken itself was perfectly crisp. Also I don’t know what’s in that mayo but it was weirdly good ( and I am not a mayo person).

Vegetarian dumplings. These were good but not great. I think I should have ordered them pan-fried rather than steamed since the flavor was good but they felt under cooked. 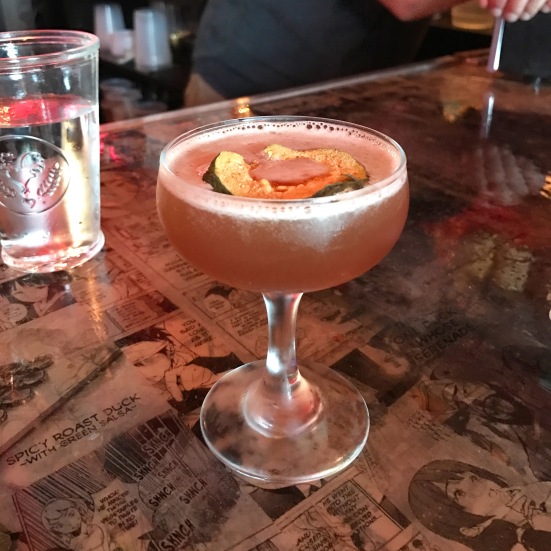 Left to right: “Ohana” Means Family (Cotton & Reed dry spiced rum, hibiscus liqueur, grapefruit). This cocktail was fantastic. It must be the spiced rum that gave it a flavor almost like mulling spices yet you could also taste the grapefruit.

Iwate Kura Herb Ale. As Dan said this beer had a ginger and peppercorn flavor, which I liked.

Kimchi ramen (kimchi infusion, braised pork, greens, soft egg, kinchi, pickled ginger). This was really good, like probably my second fav ramen there. You could really taste the fermentation. Once you got to the bottom there was this treasure trove of actual kimchi  mixed with pork which was totally the best part.

Toki classic ramen (braised pork, greens, soft egg, pickled ginger). This was well-balanced, smooth and savory, but didn’t have a super punchy flavor. I added the sriracha-like endorphin sauce but I used it sparingly given that it was pretty spicy.

Vegetarian ramen (tofu, daikon, seasonal pickles, mushrooms, greens, marinated kombu). I know this might sound crazy but this was my favorite ramen! It was just really, really good. The flavor was complex with an unexpected depth, a “real umami” in the words of one of my companions, which was surprising given that it was vegetarian. There was also a nice sesame or peanut flavor.

At the end of the meal Dan hooked us up with a little unfiltered sake action–thanks Dan!

And then I obvi made General Manager Olivier Caillabet and Dan take a pic.

Overall this was a fun and yummy meal but I daresay the cocktails may have stolen the show!