I had dinner at Doi Moi with my old survey research methodology coworkers Ruth, Arnold, Scott, Nick B and Nick H on 4-19-2017. The space was beautiful, the vibe was very chill, and the food was really good.

Doi Moi, part of Max Kuller’s Fat Baby, Inc. restaurant group, features a striking all white interior. I drive by almost everyday on my way how from work and marvel at how pristine it looks. There is a very wide open, airy feel to it. The lower level is dominated by the open kitchen while the upper level wraps around a central bar.

On the night of our dinner I got there early (of course) and was going to swing downstairs to their sister bar 2 Birds 1 Stone only to find it didn’t open until 6pm. I laughed when I sat down at the actual Doi Moi bar only to see a cocktail menu aptly titled “2 Early for 2 Birds.” By then Ruth and Arnold had arrived so we had a drink while we waited.

Basil Tea Punch (cachaca, basil, lemongrass, citrus, ginger). This was dangerously good. It was citrus-y, well balanced,  and refreshing with a slightly peppery finish. It was also part of their happy hour specials (apparently that’s what 2 Early For 2 Birds means) so it was $4 off. Score. 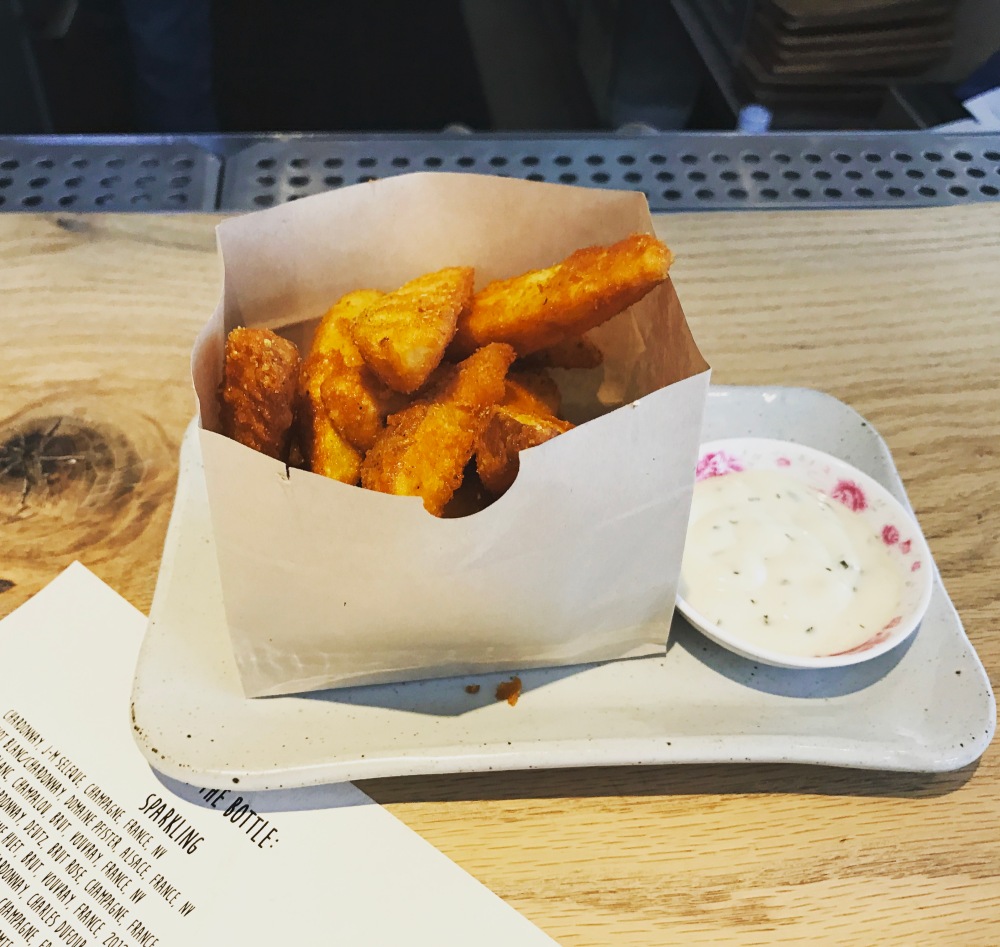 Curry fries with Thai ranch. We ordered some fries while we waited, which were also part of the happy hour offering. These smelled super curry-y but oddly didn’t have a very potent flavor. They were, however, about the most perfectly fried potato wedges–almost the consistency of curly fries.

By then the rest of our guests had arrived and we were seated. Larger parties all sort of pile into these large booths along one wall. It felt a little tight but it was also nice to be able to hear and see everyone in our group.

Lion’s Tail (bourbon, allspice dram, lime, simple syrup, bitters). Allspice dram where in the F have you been all my life?! This cocktail was great and I really think it was that little special little ingredient that took it up a notch. I dont know guys, allspice dram might be my new “egg white in a coupe” when it comes to must-have cocktail specs. Beyond this delicious new found flavor, the rest of the cocktail was a little on the strong side for me (I’m not really a bourbon gal) but it was still really good. Ruth and Nick B definitely agreed.

Steamed buns (chili braised pork, soy-mayo, pickles). These were a little dry and not super flavorful. However, the bun itself was like a perfectly soft little pillow.

After this the dishes came fast and furious, at times feeling a bit like an overwhelming cavalcade. I’m sure my friends loved that I made them wait so I could picture everything before eating. Sorry guys! 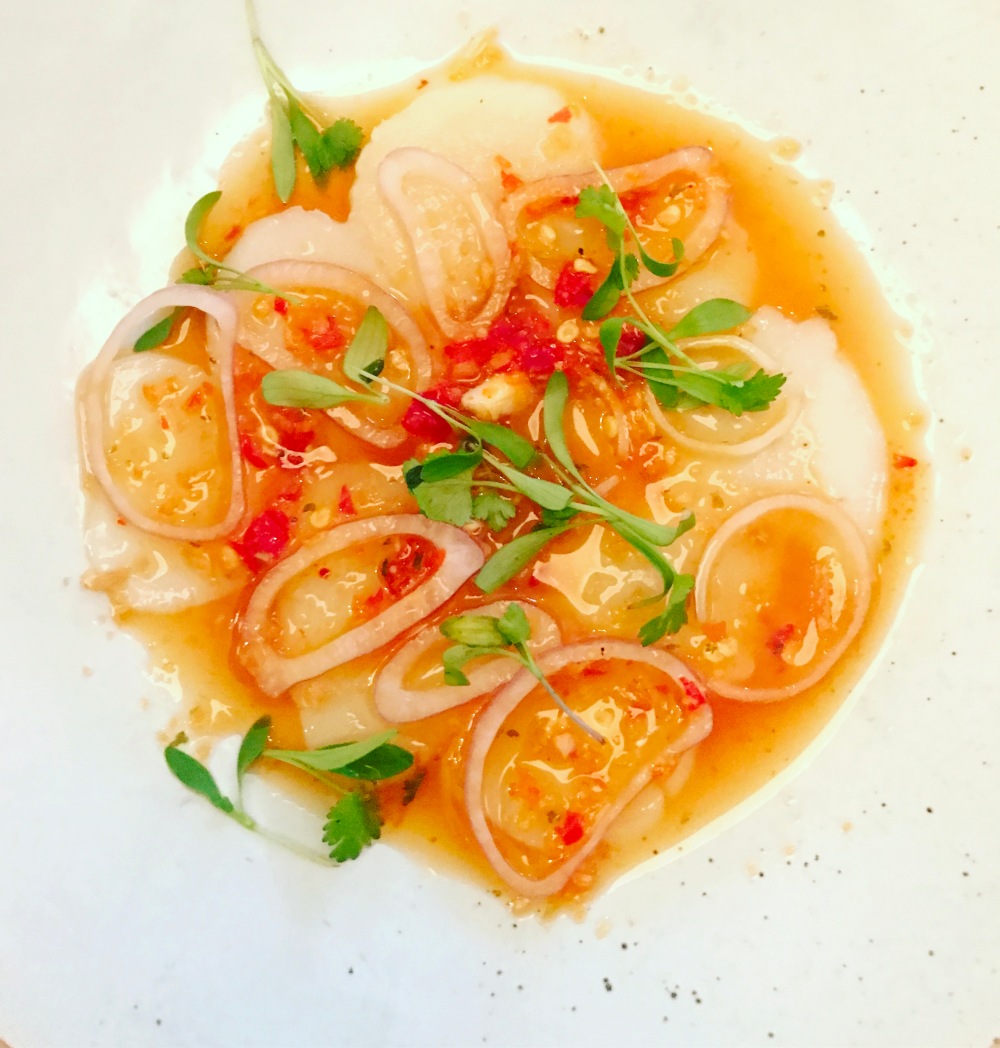 Sliced raw scallops (nam jim, fried garlic). At first blush these were absolutely amazing. The sauce was a fish sauce, thai chili, and lime situation that’s basically my favorite flavor profile ever. However, after about 3 seconds they were explosively spicy to the point I started coughing (light weight). Now the server did warn us about the heat but I apparently totally underestimated it. It was sad only because the other flavors were so wonderful and the spiciness definitely detracted from that. It also blew out my taste buds and I couldn’t really taste anything for a bit. I wish I had either finished the meal with this dish or had some milk after. 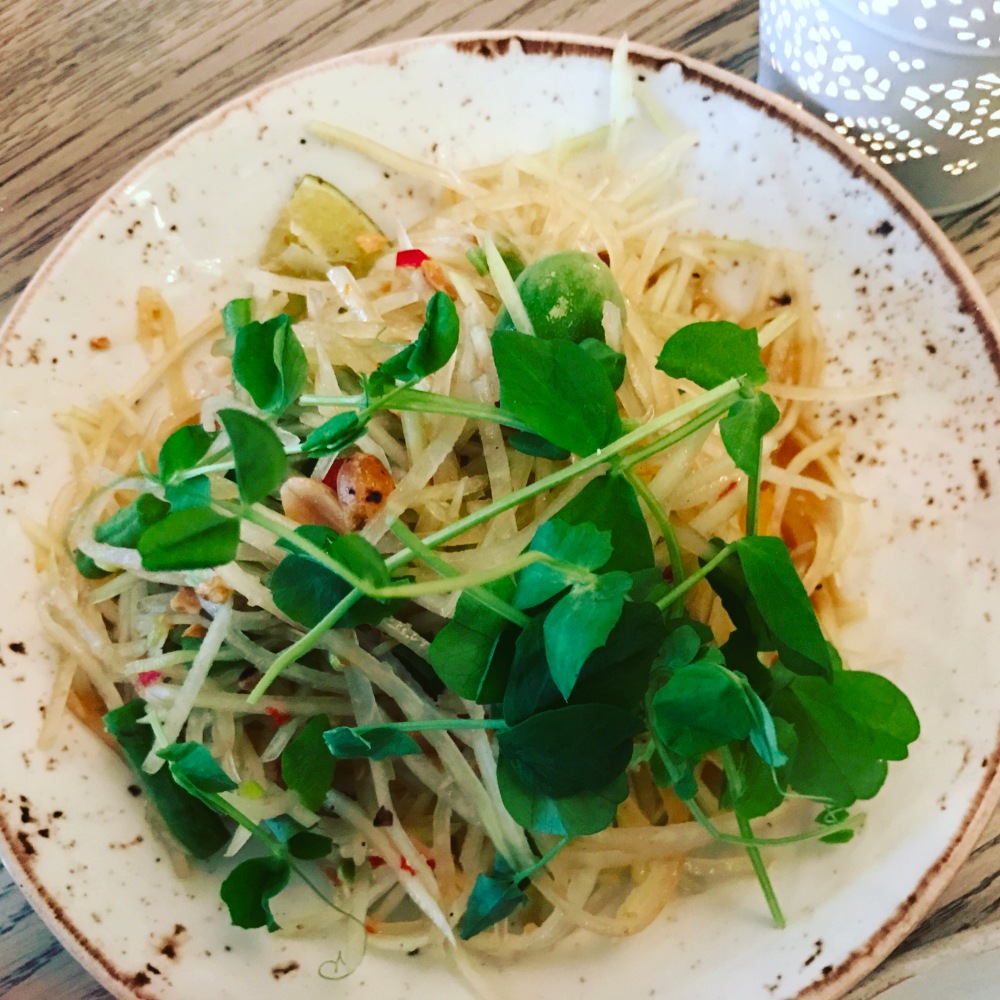 Green papaya salad (chili, lime, heirloom tomato, peanut). At first I mistakenly thought this wasn’t very complex or flavorful; then I realized I just couldn’t really taste anything after the scallops. I waited a little bit, tasted some other stuff, then came to this salad and it was amazing. Again it was a vinegar/fish sauce combo so I was in love.

Thai style fried beef jerky (shark sriracha). This was surprisingly good. I’m not usually in love with beef jerky but then again I’m not entirely sure why this is called beef jerky. It wasn’t dehydrated and was actually really tender and moist. It was almost like brisket with a little char on the outside. The sauce I could take or leave, it was sort of watered down tomato based thing, but I would definitely order this dish again for the meat.

Sticky chicken wings (Thai fish caramel, crispy garlic). Full disclosure this pic was taken about halfway through the dish so an order is more like 5 to 6 wings not 3. These were also better than I expected. They were a golden honey flavor with a nice light level of fried-ness.

Brussels sprouts (nuoc cham aioli, puffed rice). These were perhaps the best Brussels sprouts I’ve ever eaten. The aioli made them really rich and savory, while the sprouts themselves were perfectly crisp.

Crispy rice salad (sour sausage, herbs, peanut, fish sauce). The flavors in this were excellent and it actually might have been my favorite dish of the meal. You could definitely taste dill, mint, and cilantro, all mixed with a little vinegar and perfectly crisp rice. 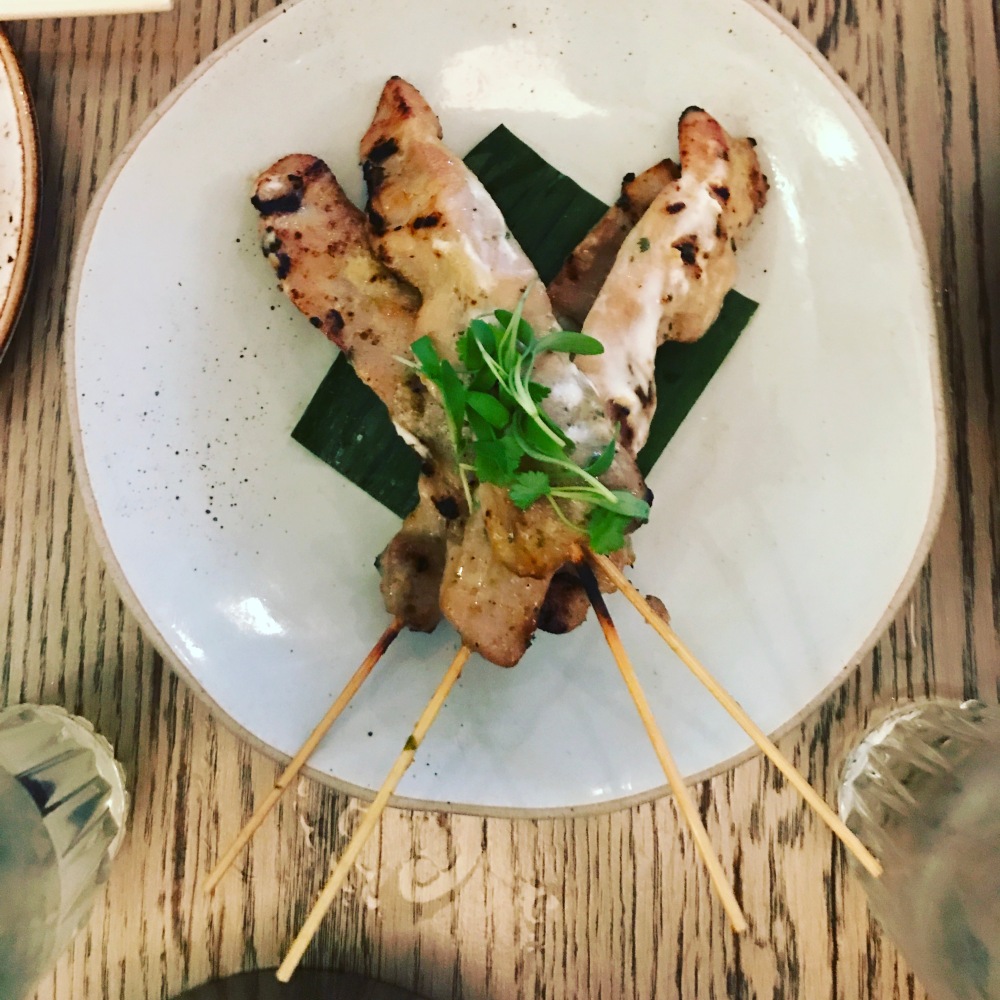 Grilled coconut chicken skewers. These were tender, moist, and light while still being savory and flavorful. They were definitely good. 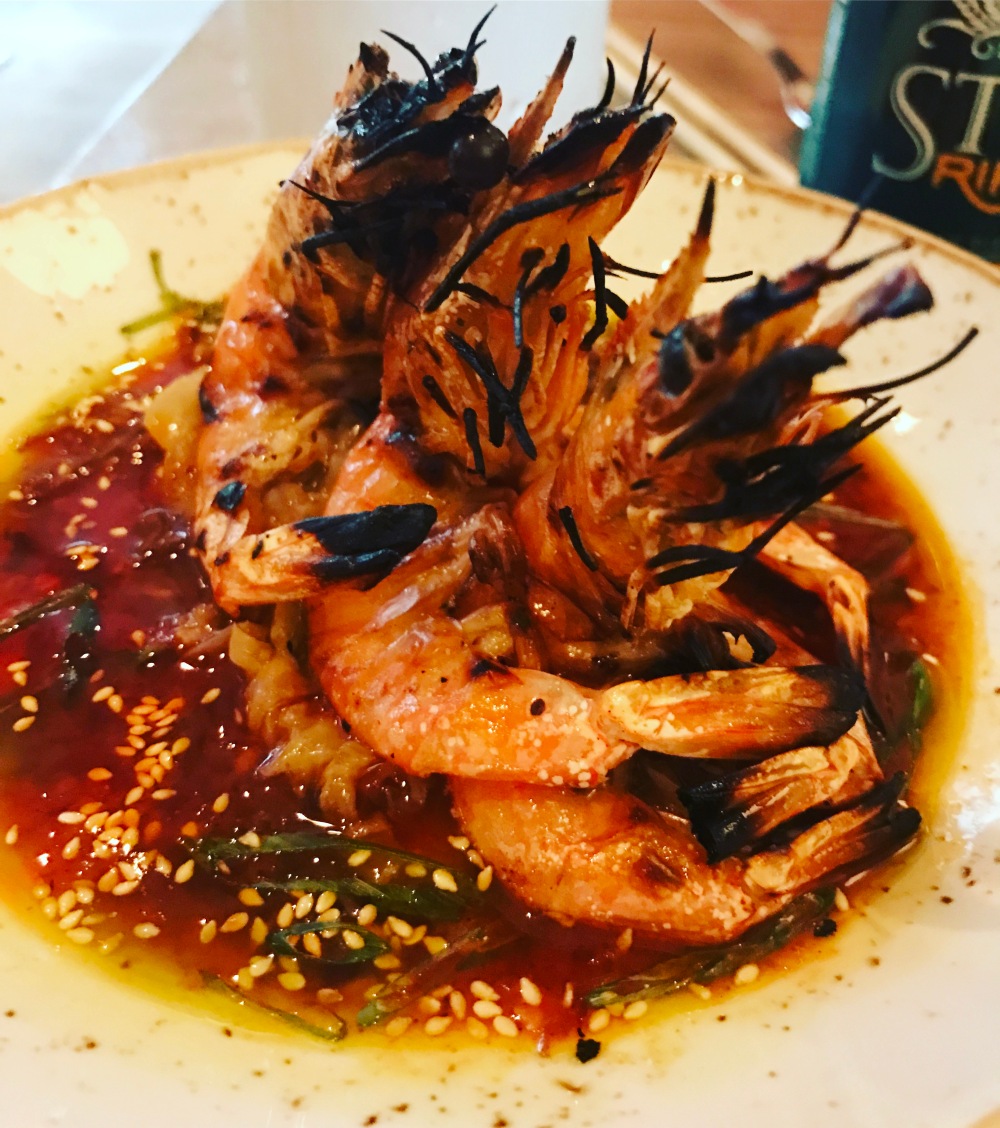 Caledonian blue shrimp (Hot N’ Juicy XO sauce, soy bean braised cabbage, sesame). These weren’t bad but they were probably my least favorite dish. The sauce was very shrimp-y, like the kind you get in Southeast Asia with the teeny tiny little shrimp in it. That contrasted somewhat strangely with the cabbage, which of course just tasted cabbage-y. The server also told us you could eat these shells similar to soft shell crabs. Maybe that’s the case but they didn’t seem any different than regular shrimp shells so that seemed a little odd. The shrimp themselves were really good though.

Shrimp and pork wontons (Szechuan pepper broth, cabbage, cilantro). These were good but after Tiger Fork’s wontons I might be a little ruined for life. The wonton skins were nice and silky while the filling was flavorful and well-balanced. The sauce was a little lack luster for me but definitely not bad by any means. 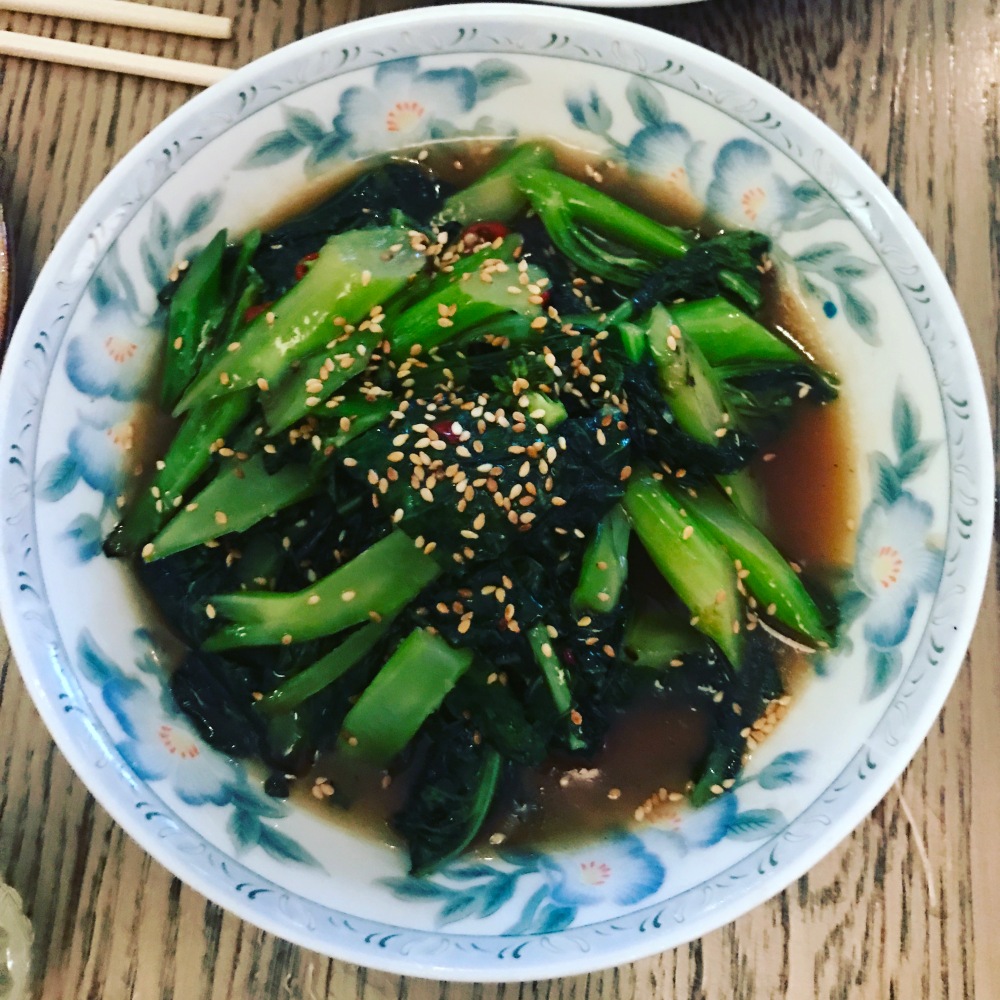 Stir friend Chinese broccoli (chili, garlic). This was good with a somewhat salt, soy sauce kind of flavor. The sesame seeds were subtle but a nice touch.

Sauteed okra (garlic, shallots, chili, sesame seed). The night we went Max was in Mexico City but sent this for the table, which was awesome. Thanks Max! And man was it good. The sesame seeds were much more prominent in this dish than the broccoli. You could also really taste a grilled flavor. Once again killin’ it with the veggies as this was possibly the best okra I’ve ever had.

Left – Cucumber basil soft serve. This was weird and delicious and I’d get it again in a heartbeat. It was sort of like tangy tart fro yo with tiny specs of cucumber throughout. And it really did straight up taste like cucumber.

Right – Banana raspberry cocoa soft serve with coffee meringue. This was very banana flavored with almost a pureed fruit texture. I couldn’t really taste the raspberry but definitely could taste the cocoa. The coffee meringue was fun and crunchy. 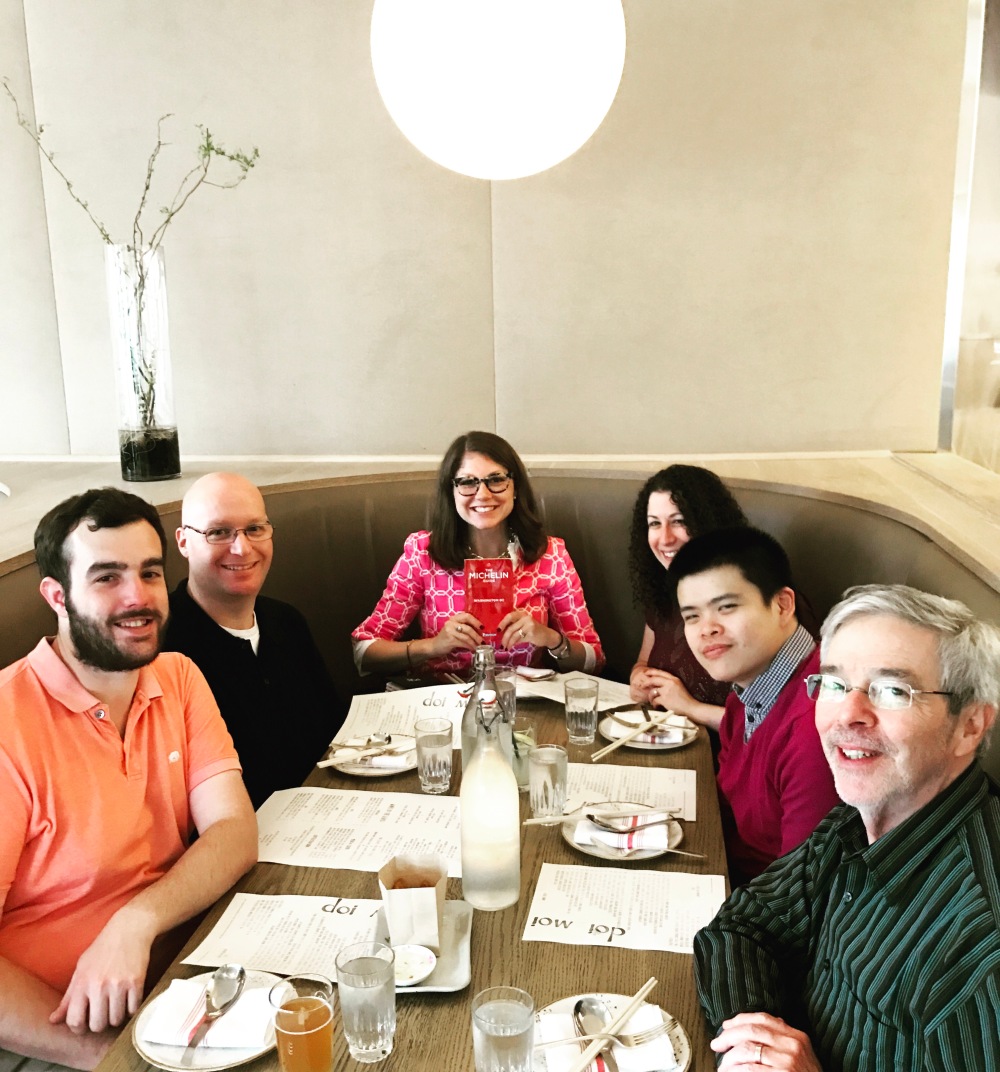 Overall this was a great place to take a medium sized group for a really good meal. The pacing made the whole meal move pretty quickly and the food was super reasonably priced. Also, eating small plates with a group can be risky but when you’re all buddies and on the same page of wanting to try as many things as possible, it makes for a really fun time.