Posted on April 6, 2017 by kyleymcgeeney

I had dinner at The Red Hen with my girlfriend Alyssa on 4-4-2017. What a cute little neighborhood joint this place is! It was comfortable and unpretentious with absolutely delicious food. That’s not to mention the fact everyone from our server to the people sitting on both sides of us were all super nice. 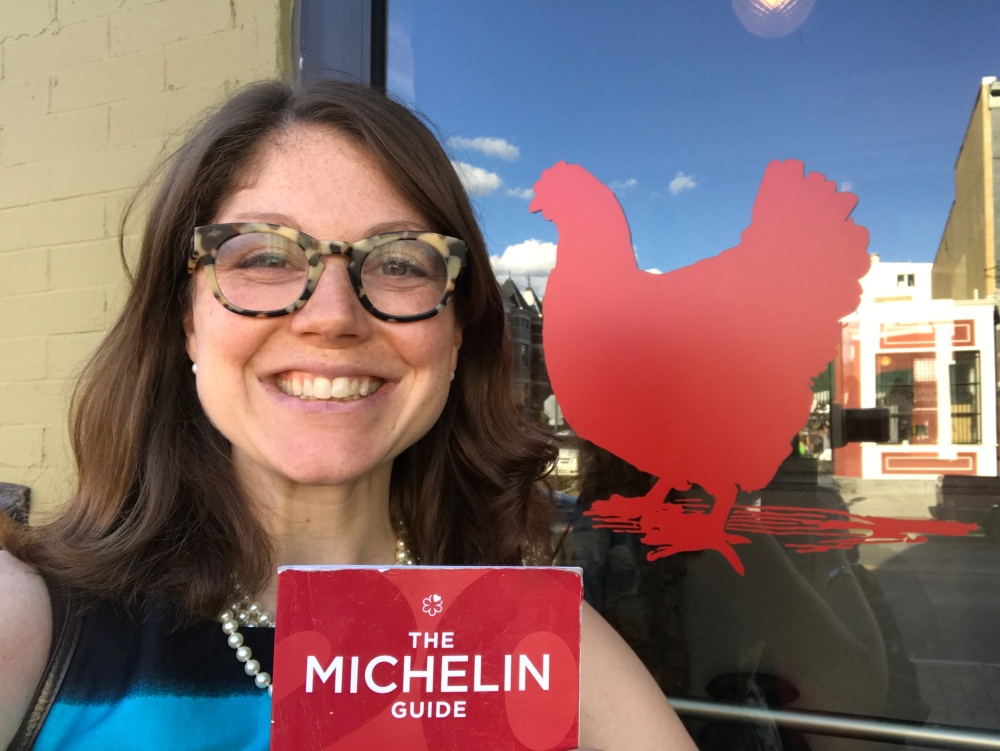 How cool is their ceiling? The tables, chairs, floor and ceiling were all wood, not to mention the actual logs being stored on shelves, while the walls were exposed brick. It had kind of a rustic vibe but still nicely finished. 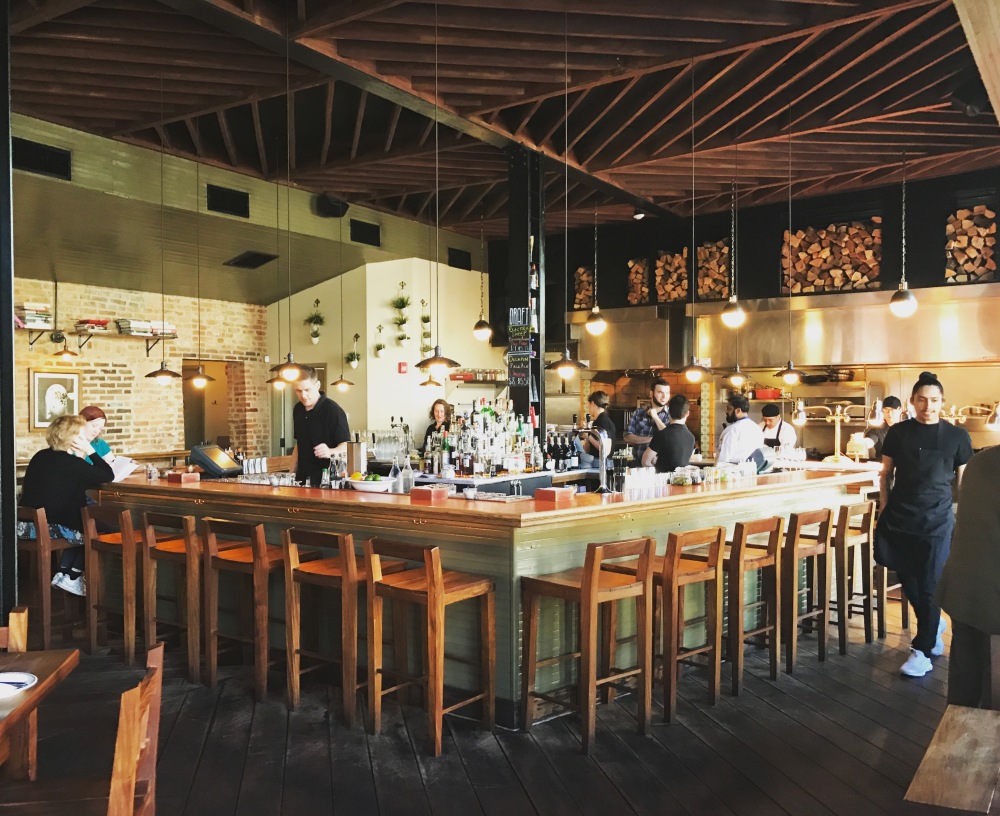 I also want to point out how much I liked the food runner who happens to be on the right in the picture above. At one point in the meal he told us what a great job we were doing based on all the amazing stuff we had ordered. I love getting a pat on the back for eating delicious things!

The Hen (Vizcaya white rum, triple sec, lime, egg white, angostura). How f-ing cool is the hen in my cocktail? Obviously I had to order it the minute I saw egg whites on the menu but I had no idea it came out so well decorated! It turns out they use a stencil and spritz on bitters to create it. Oh and it tasted really good as well. The lime and triple sec made for a very zesty, refreshing drink and of course the froth from the egg whites is always the best part.

Tuscan chicken liver mouse (fig conserva, fresh thyme, grilled bread). This came highly recommended by the server and boy was she right. It was milder than some chicken liver mousse but still rich and flavorful. The fig and the thyme melded really nicely with it as well.

After this was the first time they changed our share plates. Points! 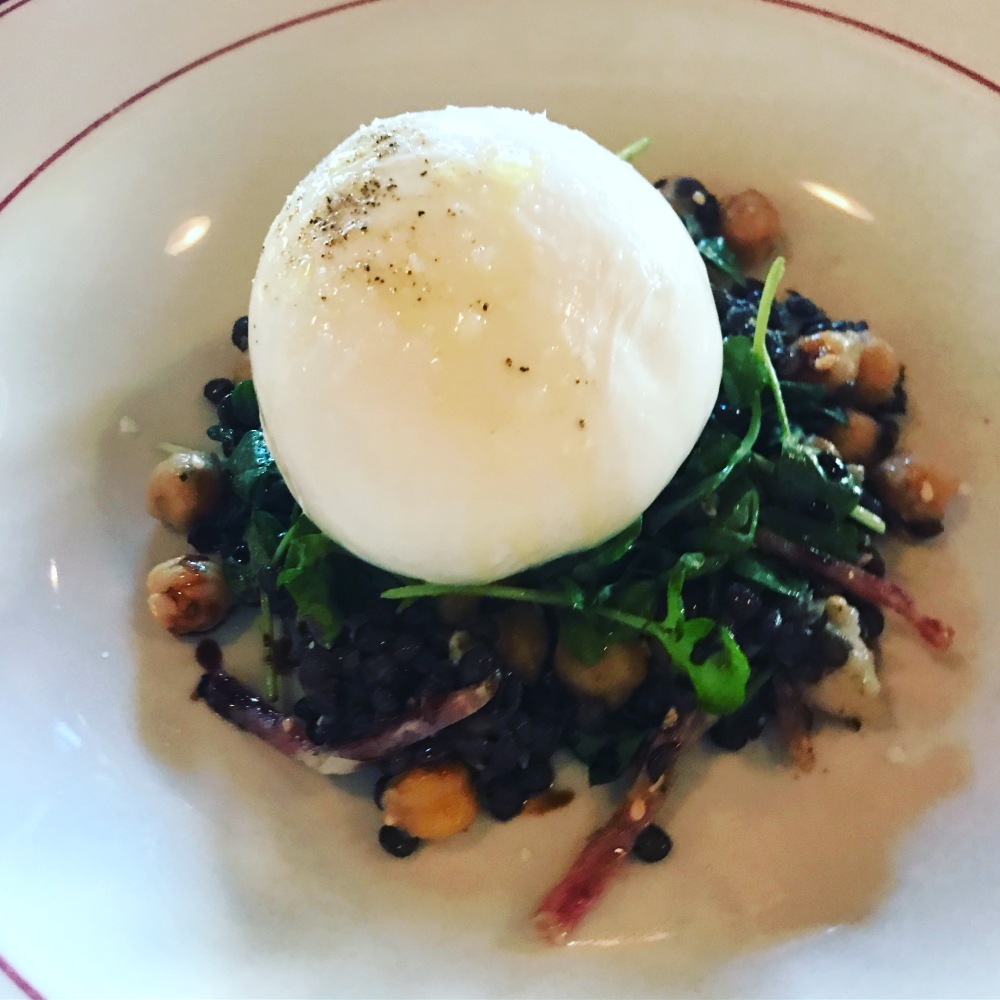 Burrata (chickpea and beluga lentil salad, salami, pea shoots, toasted sesame, oregano vinaigrette). Well obviously the burrata itself was absolutely amazing–I could that all day, everyday. The salad underneath was really good too. I could definitely taste the toasted sesame while the salami was an unexpected but delicious addition. They balanced nicely with the bright, fresh flavor of the pea shoots.

Fried cauliflower “Sicilian style” (salsa rossa, lemon yogurt, Pecorino Romano, breadcrumbs). This was really good, like way better than you’d ever think cauliflower could be. It felt almost gluttonous but then you could tell yourself you’re really just eating your vegetables. The flavor was sort of like buffalo wing sauce while the yogurt and Pecorino combined for a cheesiness not unlike the blue cheese dressing that would accompany said wings.

Listen, their bread game is on point. I think this was toasted focaccia drizzled with olive oil and lightly toasted. What really took it up a notch was that little silver cup wasn’t holding just olive oil: there was tapenade in there too! What an awesome surprise and we totally ate all of it.

This is where they changed our share plates a second time. You know how much I heart that.

Grilled octopus (cauliflower-almond crema, cucumber relish, cilantro, ‘Nduja breadcrumbs). To say this was the best grilled octopus I’ve ever had would not be an exaggeration. It was a little charred, which gave it the most amazing flavor without being dry, chewy or overdone. The crema was like a light humus without tahini and there was definitely a lemon flavor there too. The cucumber relish provided a light, vinegar-y contrast and I could seriously eat a giant bowl of it by itself as a salad. 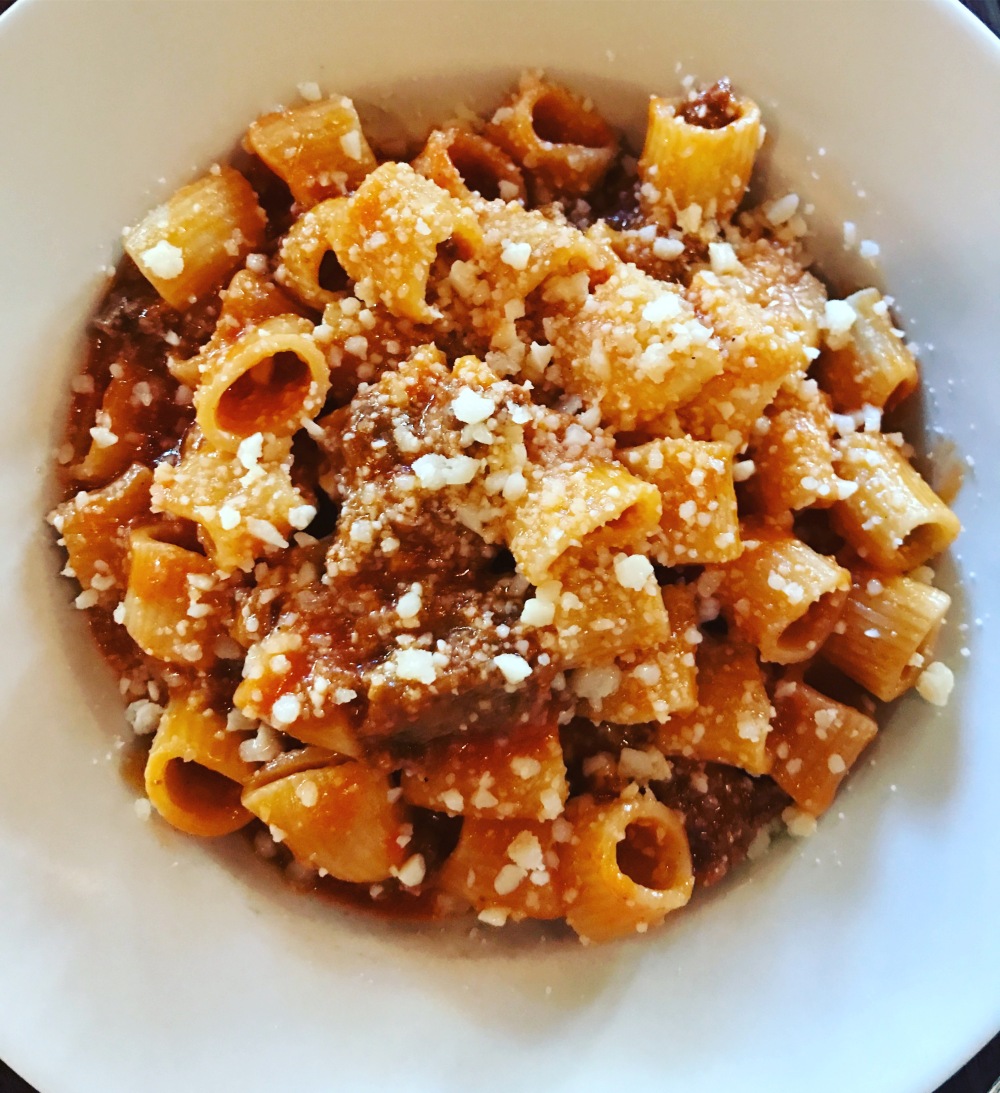 Mezzi rigatoni (fennel sausage ragu, Pecorino Romano). I mean, obviously. This is their signature dish and it’s so easy to see why. Before I even tasted it the smell alone was enough to win me over. Then once I tried it, forget about it. The fennel sausage was absolutely perfect. You know how sometimes sausage can be too spicy or the fennel is too overpowering? This was neither: it was flavorful without sort of accosting your taste buds. And the sauce itself was absolutely delicious as well. So yes, you should definitely get this.

Maple custard (caramelized hazelnut crumble). The custard itself was so, so good. It was light yet decadent, just like the custard in creme brulee. The hazelnut crumble was a little too nutty at times, in that it was maybe a little dry or not that sweet, but the taste was really good nonetheless.

I wanted to keep up the tradition of having my Michelin Guide signed after doing so at Blue Duck Tavern. Unfortunately the chef wasn’t in so the sous chef, Anshu Khetan, actually signed it for me. How cute is the Red Hen stamp??

Overall this was a very relaxed, casual meal with really, really delicious food.  I would definitely go back again. And photo credit to the lovely lady sitting next to us. Thanks!

P.S. The mezzi rigatoni made for some amazing leftovers. You’re welcome, Mr. McGeeney!